A small number of club members were privileged to take part in a coaching workshop last week delivered by Ex-England National Coach Paul Carter. It certainly left all the participants with plenty to think about!

Paul was national champion in 1988 and has gone on to have an illustrious career in coaching. He is renowned for his modern and innovative thinking on the game and it is that reputation that ensures some of the world’s best young players still seek him out and use him as their coach. The workshop was delivered to a small group of racquets members who listened intently to a talk in the quiet lounge and were then taken on court to put the theory into practice.

The core message was very much about taking what the best players in the world are doing and putting some of this into your game. It was a fascinating session full of modern views and thoughts on the follow through, footwork patterns and giving yourself options on every shot. What came through loud and clear is that none of this is possible without getting the basics of grip and movement correct.

The game is now faster and more dynamic than ever, with lighter racquets, lower tins, different scoring and attacking shots played from all over the court. It is therefore easy for today’s juniors (and battle-hardened club members!) to watch the professionals, get carried away and forget the basics. Paul’s style of coaching struck a wonderful blend of old and new. As a coach his stock has never waned and he is expected to be working with the England team once again at this year’s Commonwealth Games. When talking about movement on court it was perhaps surprising therefore, that despite the tremendous athleticism shown by the modern players,  he still rates Jansher Khan as the greatest mover of all time. Why you may ask? Well again it comes back to basics and his explosive and smooth movement off the ball.

Another key message of the evening was that in squash (and sport in general) there is very often no “right” or “wrong” way and the skill of the coach is to recognise what works for players and work with this. All the participants will have certainly taken plenty away from a thoroughly enjoyable and insightful night.

With 15 divisions now up and running in our internal club leagues and the junior section growing by the week, squash is certainly thriving at the club. The Club handicap tournament is next on the agenda and we will no doubt then look to invite Paul back in the New Year and give more players a chance to benefit from his expertise. 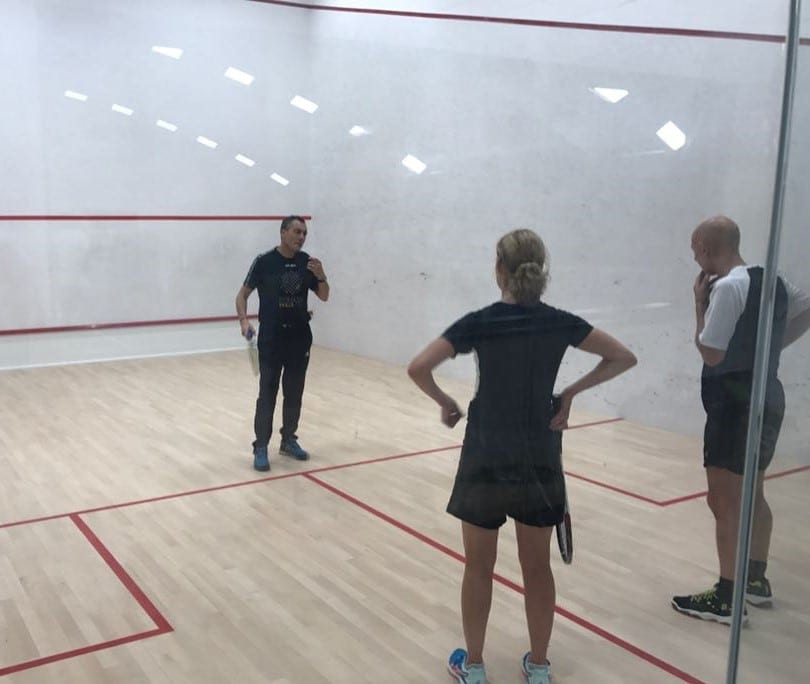