In a first for Bedfordshire, the County Closed Squash Finals were live streamed by EpicTech Media. This meant that a packed gallery of 50 was augmented by plenty watching from the comfort of their own homes.

Club Towers hosted the whole County Closed event, which ran across Friday evening, Saturday and Sunday afternoon, and attracted a record entry from across the County. It created a great vibe in the Club and we were treated to some excellent matches across all three days.

In the A Grade event, Steve Davies won a fast paced, hard hitting semi-final contest against new(ish) member and youngster Jasper Kettle, with Davies’ greater experience and control prevailing in a 3-0 win. In the other semi-final, Will Montgomery from Club Towers also had a relatively straightforward 3-0 win over Biggleswade’s Marcus Gray, who looked to be suffering the after-effects of a marathon effort in overcoming second seed Nathan Derrick 3-1 in the previous round.

In the final, a repeat of our recent Club Championship finals, Davies had a relatively comfortable 3-0 victory over Montgomery to take his 9th County title – an amazing achievement. Double figures next year?

In the B Grade event, an eagerly anticipated final saw top seed Damien Pell take on second seed Simon Marshall – both from Club Towers. A 3-0 victory for Pell sounds straightforward on paper, but he worked very hard to keep Marshall at the back of the court and unable to bring his excellent short game into the match. A hard-earned and well-deserved victory for Pell.

The women’s final saw Club Towers’ Juliet Johnson take on Biggleswade’s Rachel Kirby. Juliet fought bravely and came close to taking the match to a fourth, when anything could have happened. But Rachel held firm for an excellent 3-0 victory and the County women’s title.

The plate events for first round losers were also highly competitive. In the A Grade Plate, the final saw Ryan Pescod take on Biggleswade’s Phil Jenkins. It was a tight match, with Jenkins battling back to level the match at 1-1. However, Pescod is on a superb run of form and managed to increase the pace again to take the final 3-1.

The B Plate event saw one of our top juniors, 14-year old Jonathan Towers, win through to the final with two excellent and very tight wins against higher ranked opponents. In the final he faced Steve Axford from Luton, who had played a huge amount of squash over the weekend in both the O55 and B Grade events. Youth prevailed and Jonathan took the title 3-0 in an excellent display of fierce hitting.

The O55 event saw a repeat of the 2019 final, with defending champion Matthew Towers taking on Steve Barlow. It was a very similar battle to the previous final, with both players taking themselves to their endurance limits, but this time Barlow prevailed 3-2 in a marathon 60-minute match.

Many thanks to Simon Marshall for organising the event superbly and all those who helped including Phil Jenkins and Steve Davies. Thanks also to EpicTech Media for their excellent Live Stream coverage of the finals, including some superb “slo-mo” action replays. It really is worth a look and you can catch the recordings on below.

B Grade Final – D.Pell vs S.Marshall

We are already looking forward to an even bigger and better event next year!! 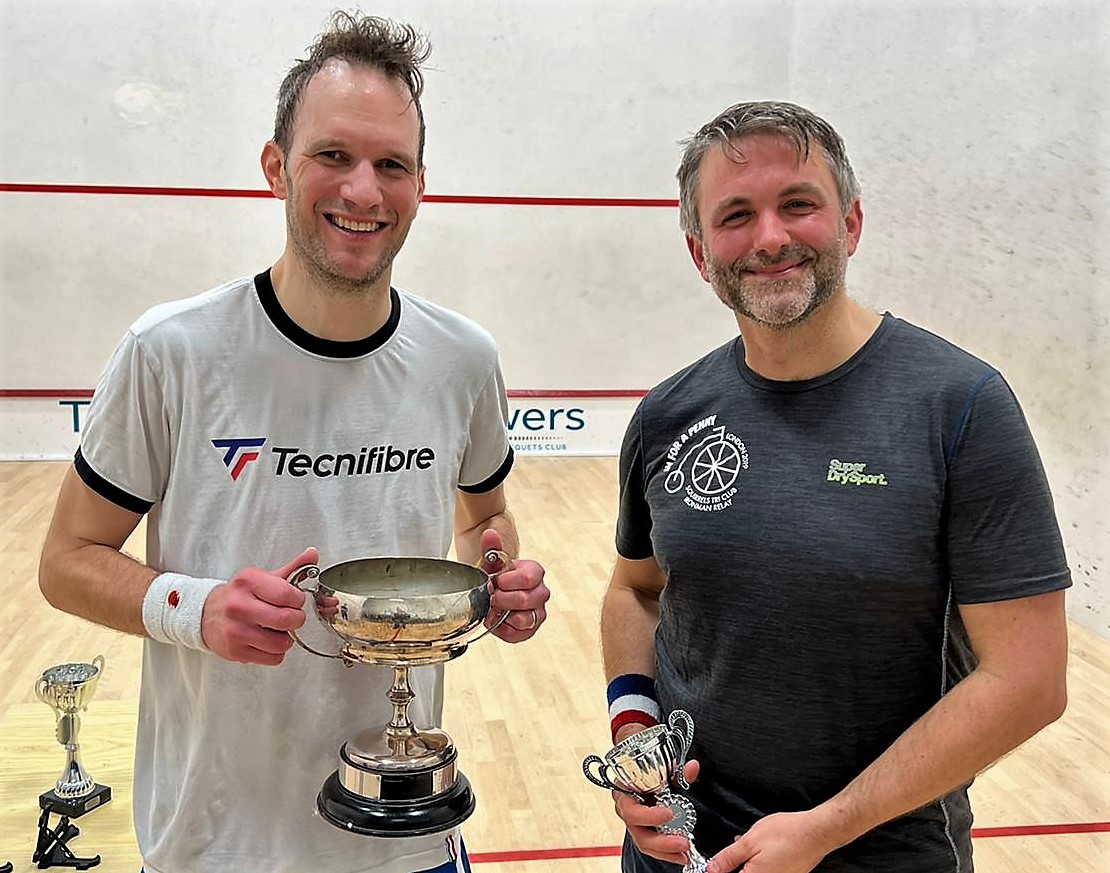