A tense afternoon of table tennis culminated with Ian Thomas taking the first ever Club Towers Championships, overcoming Dave Albone in a tight and nerve wracking final. Eight members competed for the coveted prize on 23rd April, with  Jason Bernard, Jools Cooper, Billy Sanders, Simon Marshall, Phil Torr and Cem Cakir joining Dave and Ian for an afternoon of great entertainment and lots of skill. The standard was high!

The tournament was played in a Monrad format, where all the players continue to play (win or lose) through to a final finishing position. This enabled all players to play three matches. Some of the competitors had prepared well by turning up on the last two Sundays for practice with the “robot” kindly lent by Ian Thomas. Thanks Ian!

There was a wide range of playing styles, some long tussles and epic spinning rallies. There were closely fought battles between Phil and Dave in the first semi-final and similarly Ian against Billy in the second semi. Dave and Ian both came through to the final and the scene was set for a spinning masterclass. But first Billy and Phil contested the 3rd place play-off. This was also a really good match, with Billy coming through to win.

And now to the final – Ian and Dave both have attacking instincts and had to choose the right moment to pile in with their topspin bombs. Dave’s defence was admirable from deep positions but eventually Ian came through to claim the title and the impressive trophy.

Thanks to all who joined us on the day and congratulations to Ian who is also our current Racketlon champion.

If you are interested in table tennis, we will introduce a box league in the near future. If you want to join the league or would like to make contact with other members playing table tennis please contact Steve Adams on 07896 899467 or at steve.adams@clubtowers.com who will be happy to help.

We have our table out at weekends from 2pm to 8pm on squash court 4 and play can be booked at Reception by racquets members. Juniors aged 11 and over can play on their own (whilst parents/guardians stay in the Club) or under 11 with a fellow racquets member over 18.  We have bats and balls to borrow if you don’t have your own; please ask at Reception but please do wear indoor, non-marking footwear (no outdoor trainers/shoes and no black soles please!). 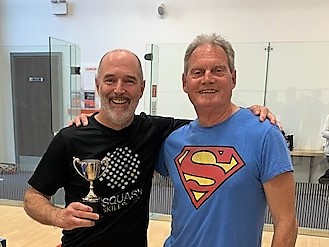